Waterproofing the basement of a home has become more necessary in recent years. Climate change is the issue of our age. More water evaporates into the atmosphere as the weather warms up. Downpours are heavier.

Humans have caused this, and the world now is grappling with ways to combat it, as the situation worsens. Last spring and summer, there was widespread flooding that affected thousands of Canadians.

The costs to everyday Canadians as a result of climate change continue to rise. The bottom line is heavier rain increases the risk that your home will experience a flood or a sewer backup. The home’s foundation drainage system is interconnected and complicated, and includes the city’s sanitary sewer lateral, perhaps a storm service lateral (in newer homes), a weeping tile system that channels water away from the foundation, drain pipes and sump pumps. Any failure there leaves the home exposed to flooding.

Anyone who owns or rents can talk about the emotional and financial costs of a flood. According to a report by the Insurance Bureau of Canada, a flooded basement in 2018 cost an average of $43,000 to repair. Flood insurance covered some of that cost, but likely not all of it.

It is vitally important that homeowners get a quality waterproofing system for their home. Call Canada Waterproofers for a free, no-strings-attached estimate.

WHAT IS THE BEST BASEMENT WATERPROOFING METHOD?

External waterproofing is the costlier method, but there is a reason for that. Particularly vulnerable areas in the house are where the concrete floor meets the wall, through the mortar between concrete blocks, or through the home’s foundation walls themselves.

Water pressure on your home’s perimeter only gets worse as rainfall levels increase, and the ground becomes more saturated. Exterior waterproofing attacks that problem at its source, and is a sure fire way to keep your home dry and safe.

It’s also a major excavation project, and should only be handled by licensed professionals. Workers will dig down to the home’s footing level, all around the perimeter. They’ll clean the cement wall, repair any cracks with hydraulic cement. They’ll apply a foundation aqua bloc, fiber mesh for reinforcement, then another coat of aqua block and polyurethane. Then they will install Delta MS drainage membrane, and a new “Big O” weeper tile with filter designed to push water away from the home’s foundation.

Exterior waterproofing is the most complete approach to keep a basement dry.

DOES WATERPROOFING A BASEMENT ADD VALUE TO A HOME?

Anyone looking to buy a home now will ask about its waterproofing protection, since the warming of the climate and heavier rains are now front and centre in people’s minds.

If an individual hasn’t experienced a flood directly, they will likely know someone who has, and understand the immense financial and emotional cost that comes with a flood. That includes family keepsakes and work files that could be lost.

The home purchase is the most important investment most of us will ever make. We only want the value of that investment to go up. If there is a flood, with the longer-term water-damage implications that come with that, including mould and mildew, that will only eat away at the home’s value.

IS BASEMENT WATERPROOFING COVERED BY INSURANCE?

With the right information, and for a few hundred dollars extra per year, homeowners can take proactive steps to have the proper insurance in place to protect their home from flooding.

Call your insurance company to make sure you have adequate coverage, since older plans may not cover overland flooding, which has become a more common problem with the increase in rainfall.

Traditional insurance covers damage caused by sewer backups, which is of course important, but your plan may not cover water that flows into the basement through cracks in the walls or via window wells. Insurers only began offering overland coverage over the past few years.

HOW MUCH DOES BASEMENT WATERPROOFING COST?

Prices vary depending on the complexity of the job, but exterior waterproofing starts at around $100 per foot and can go up to $1,000 per foot. The depth of the home’s foundation is a major issue in determining cost.

The cost for interior waterproofing ranges from $75 per foot up to around $250 per foot.

Call Canada Waterproofers for a free assessment and cost estimate. Keep in mind that the city of Toronto offers subsidies for the installation of flood protection devices. 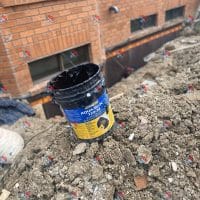