SUMP PUMPS AND BACKWATER VALVES
Two of the most important tools in the effort to re-direct water away from your basement, keeping it cozy and dry, is a sump pump and a backwater valve.

Canada Waterproofers Uxbridge has a team of professionals with years of experience, trained to do the job right. You don’t want to leave the job in the hands of amateurs. Our team has the proper licenses and insurance, and we’ll install a waterproofing solution that is custom fit for your home, in your budget range.

more common. Too often waterproofing companies are brought in after the fact – after a flood, sewer back-up, or water damage. Homeowners are then out thousands of dollars to clean everything up, not to mention personal possessions, important documents and moments that are damaged or lost forever.

We hear a lot about how budgets are stretched at all levels of government. In Toronto, the city manages one of the largest water and wastewater systems in North America – all day, all night, all year. That system ensures that over 3.6 million people and businesses in Toronto, and portions of York and Peel, have access to safe, clean drinking water.

As we all see on the news – or just by looking out our windows – the global climate is changing. Warming temperatures. More regular, and heavier, precipitation. Heavy rains and snowfalls are overwhelming the aging sewer infrastructure across our community. One of the unfortunate by-products of all of this has been flooding in neighbourhood homes.

The job of the sump pump, installed in the basement, is to keep the basement dry. This is “must-have” technology in the battle against water intrusion and flooding. An exterior waterproofing solution takes care of the water leak issue at its source – protective membranes across the outer walls of the home’s foundation. A sump pump has your back – just in case. It pumps water out of a sump pit or tank to an area outside the home that is non-problematic – maybe a storm drain or a dry well.

There are three parts to a sump pump – a tank that holds water that has collected from a weeping tile system, a pump that pushes the water up and out of the home, and a battery back-up system and alarm – in case a storm knocks out the power. More on that later.

Pretty straightforward – let our technicians handle it for you.

The older method of draining a weeping tile was to connect it to the home’s drainage system. But as we have said that system is older, wearing down, and is becoming more overwhelmed as weather systems change, and we see more, and heavier, rainfall.

When a sump pump is installed the old weeping tile connection to the city sewer is disconnected. That will help avoid flooding in your home.

The sump pump is installed inside the basement along the wall – as long as there is a place to discharge the water (so the water doesn’t flow back into the house). The crews at Canada Waterproofers Uxbridge will excavate, remove and dispose of the soil, and install a water tank (also called a sump liner).

Next step is to set up a connection from the existing weeping tile (or the new weeping tile, if installed) to the side of the tank.

Our technicians will then encase the tank with gravel (3/4” clear), re-cement around the tank, install a submersible pump, then test the system (discharge water to the exterior). If all checks out and meets our high standards, we’ll put a lid on the tank, bolt it down, and you are good to go.

There are two – a battery back-up and a water-powered system. Both ensure you have water pumping out of your house in the event the power goes out during a storm.

The battery system consists of a separate pump that runs off a marine battery. This back-up pump will automatically switch on during a power failure. It can operate without main power for up to 24 hours. There’s also an alarm, which will switch on automatically, so you know the battery-powered unit is in operation.

The water-powered one is just that – the water source to your home turns the pump turbine, which then pumps water out of your basement. With this pump there is no time limit as to how long it will run. As long as your water supply is on this pump will work.

Talk to a technician from Canada Waterproofers Uxbridge about these back-up systems.

A backwater valve is a one-way valve that stops sewer back-ups through the pipes and back into your home – a true nightmare scenario.

In fact, new homes now need to have these devices installed. It’s a different story with older homes.

The normally open position of the backwater valve allows for waste water to follow freely out of your home. But when the sewer backs up the other way the valve will close automatically.

The crew will excavate where the sewage connection leaves the house (normally in the front of the house), inside or outside the foundation wall. The building code stipulates that the valve has to be within a maximum of three feet from the front wall and you cannot have a Y Pipe connected within three feet behind the valve, or you risk having the sewage back up into the house.

The Canada Waterproofers Uxbridge crew will support the pipework with gravel and then back-fill and compact the ground, followed by inside concrete finish and outside gravel finish. Clean-up is the last step.

Keep in mind – when installing any new fixture a permit from the city is required. Ask us about it.

Canada Waterproofers Uxbridge understands that a flooded basement can be traumatic and cause a massive upheaval in one’s life. It can be a very expensive issue to fix.

But we also know that if you take the correct precautions, waterproof your basement in large part by using technology like sump pumps and backwater valves, then you’ll never have to experience that stress and upheaval.

Give us a call for a free assessment. 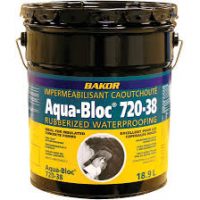